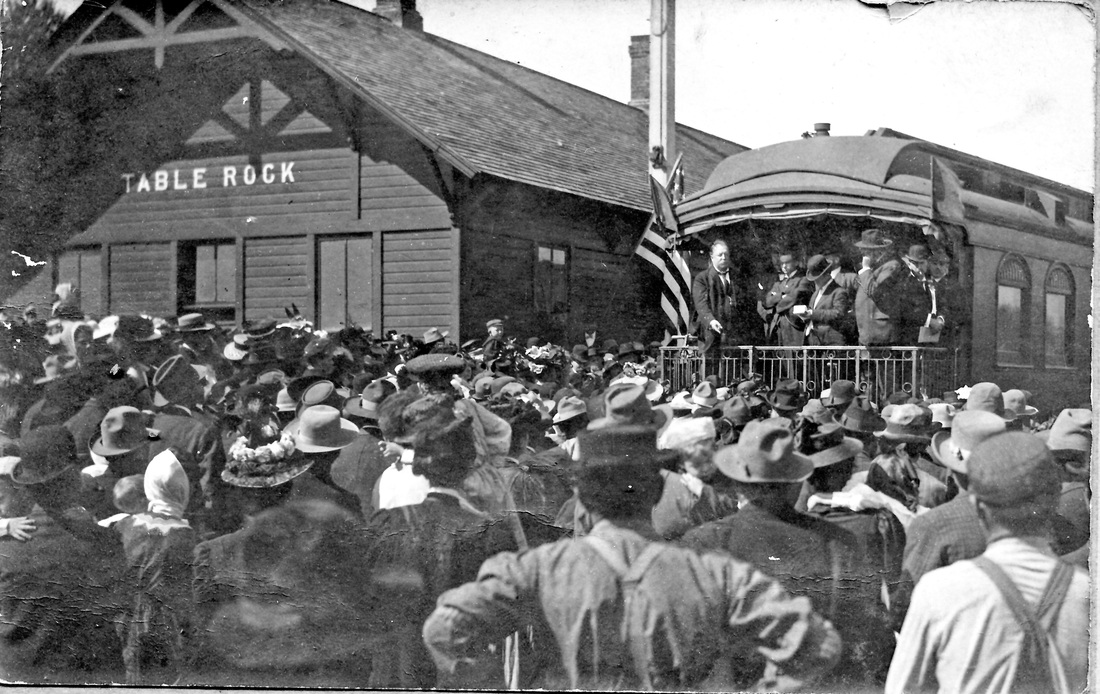 Photo 619
This photograph is labeled has being of Teddy Roosevelt running for president.  If accurate, this establishes the date of the photograph as 1912, when Roosevelt engaged in a whistle stop campaign as he ran for president.  He criss-crossed the country.  As his train approached a station, the engineer whistled, the train pulled into the station, he gave a speech, and then traveled on.

The grueling "whistle stop" campaign that Teddy used has been adopted by political candidates since then. Before that, the runner stayed in place and made "chicken dinner" and received visitors while others fanned out around the country to campaign.  Candidates had traveled by train to make speeches. Just TRAVELED around. They did not buzz around the country with the ferocious speed and coverage of Teddy's whistle stops. The two main parties had the money to do that. Teddy decided to go out on his own.

Teddy had already been president once, but then lost to William Taft.  He then broke away from the Republicans and formed his own party, the "Progressive Party," which immediately became known as the "Bull Moose Party." The term was taken from one of Roosevelt's speeches.

In running for president, Teddy advocated a minimum wage for women, an eight-hour workday, social security, a national health service, and the direct election of senators.  He was up against Woodrow Wilson and William Taft, who also took off by train.  Teddy took second place, but won the popular vote by a large margin. It is said to have been the most successful campaign by a third party candidate.

He was the first to make a "whistle stop" tour, although others had engaged in train tours during which they made speeches.  He himself had engaged in a train tour in 1900, as he had engaged in speech-making in a train tour in 1900 as a vice presidential candidate. He was campaigning on behalf of presidential nominee William McKinley, while McKinley engaged in a "front porch" campaign, receiving visitors.  In going out to campaign, Teddy described himself in a speech as being "strong as a bull moose." McKinley went up against Nebraska's William Jennings Bryan, who was the Democratic candidate and won. But McKinley was assassinated and Roosevelt stepped up to be president.   However, when the presidency ended, he headed for a long safari in Africa.  When he came back, he was not happy with what was going on in the country and ended up forming his own political party. And running for president by campaigning by person all over the country. .
Learn more about Teddy Roosevelt
Some excerpts of Photo 619:

about teddy's 1900 visit to nebraska

Teddy visited Nebraska in 1900.  He was the governor of New York, and the vice presidential candidate.  He was campaigning for thre presidential candidate, McKinley.  Here is a July 26, 1900 article from the national insert of the Argus.  It does not mention the expected destinations and it is unknown whether Teddy visited Table Rock on this tour.  This is a slide show set on manual. Click the arrow to continue to the next section of the article.
View My Stats